DOWN SET FIGHT! Behind the scenes... 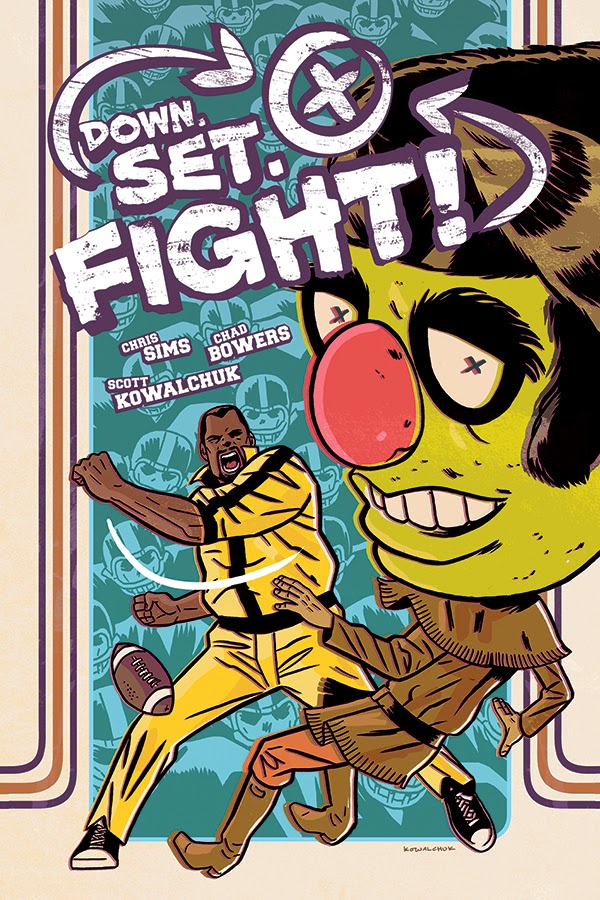 So, as if you didn't already know, today marks the release of DOWN SET FIGHT!  Hurray!  Hazzuh!  And the like...!  Of all my work to date this is the one I am most fond of.  Having looked through the TPB I realized it was so packed full of story we weren't able to include any of development work.  Oh, boy, chumps and chumpettes are you in for it now.

Here it comes, a post specially dedicated to some of the behind-the-scenes work I did leading up to the production of DSF.

The first time I was contact about the book was late 2010 -- Editor-man Charlie Chu and I had been discussing about finding me a home at ONI (thanks again, Charlie, you're the best!).  After batting a few pitches back and forth he sent me what was the initial pitch for DOWN SET FIGHT! from Chris Sims and Chad Bowers.  To ensure the union would be solid I was asked to develop some character sketches and tackle (pun! Boooo!) audition pages (which I've just discovered have been lost to the ravages of time).

Now, bear in mind, this was even prior to the release of my first book THE INTREPIDS so you'll quickly notice the difference in refinement.  First up the original design for FEARLESS himself: 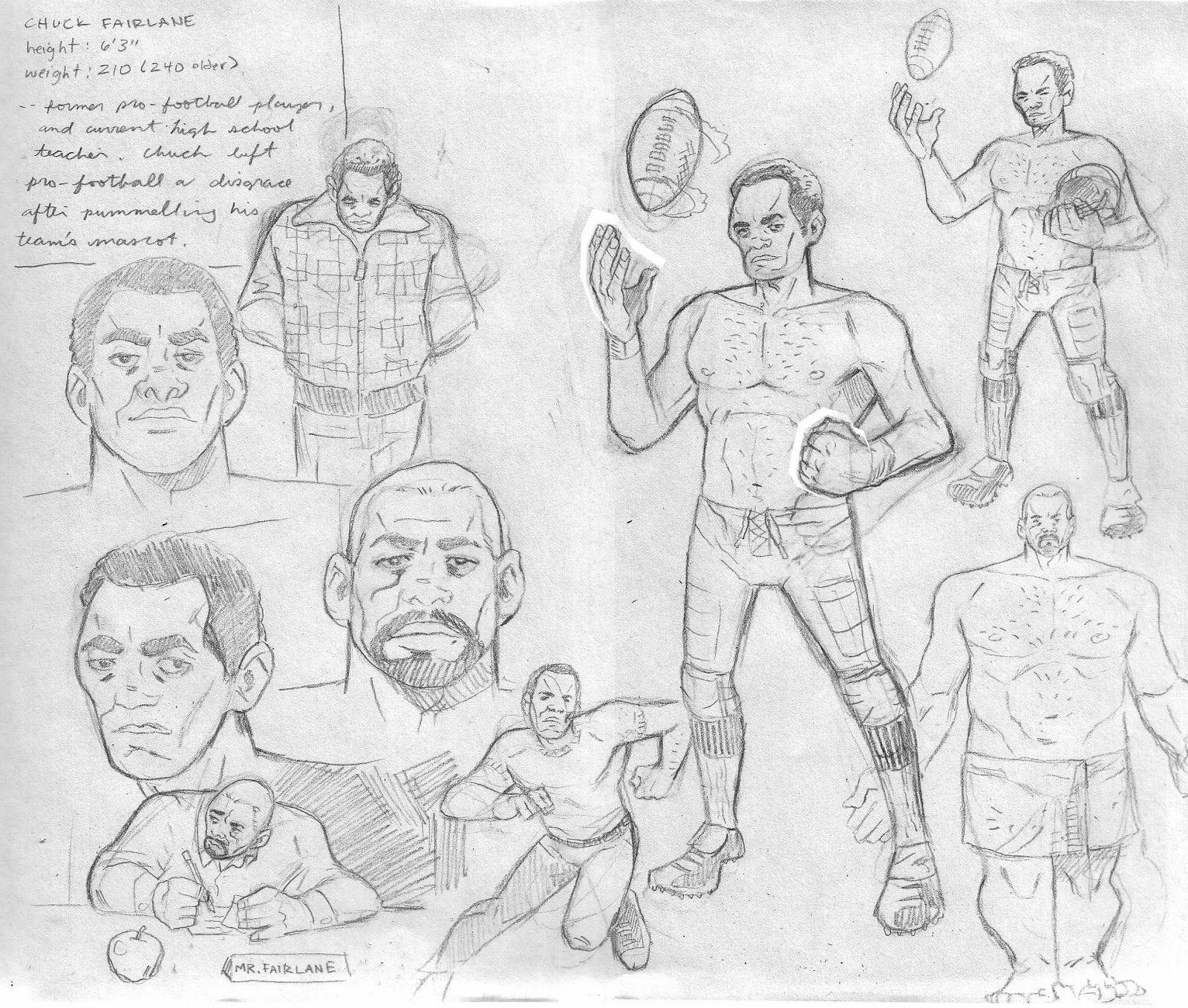 Then I took a run a Al Fairlane -- gang all agreed he was WAY too Get Carter Michael Caine.  Still, I tried to keep some of that in the final design: 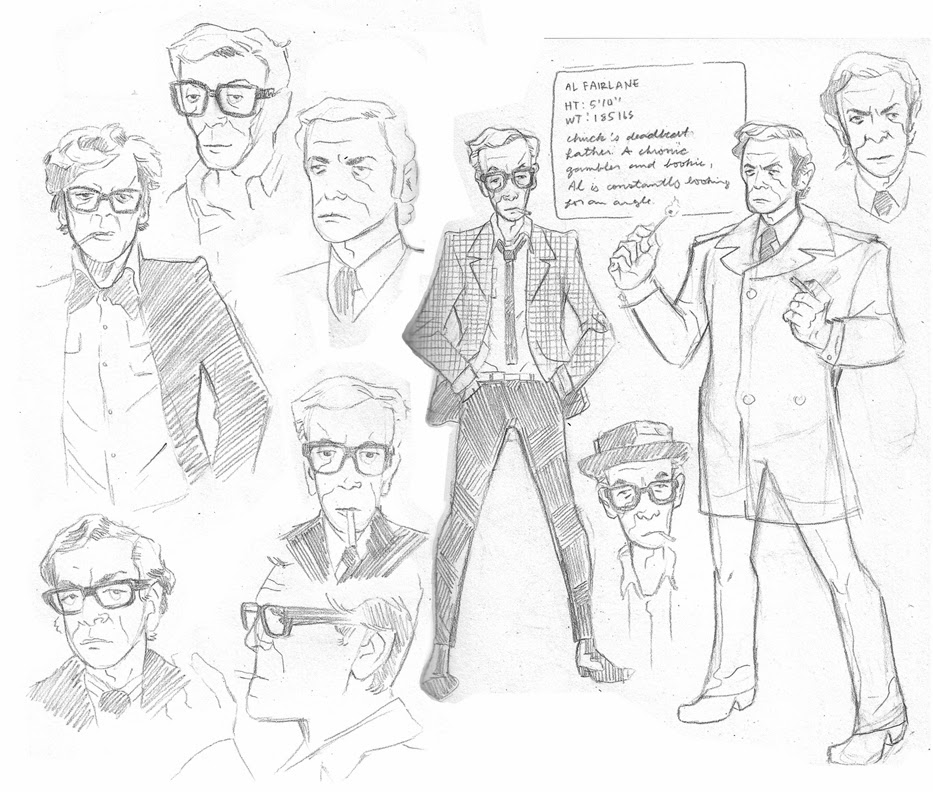 With a quick revision, we landed on something everyone agreed on: 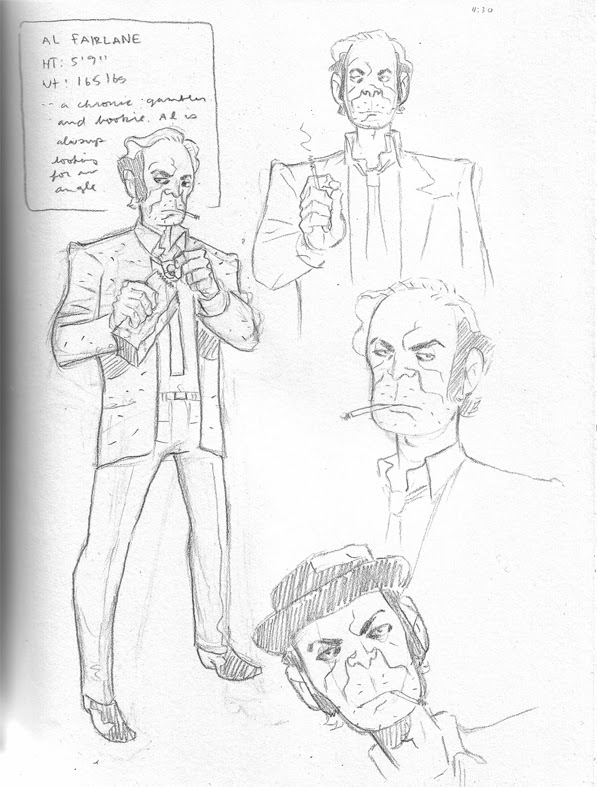 Seriously, I cannot believe how much I've grown artistically since these.

Then came, Molly.  I think the inspiration for her is pretty obvious.  At least, I think it is. 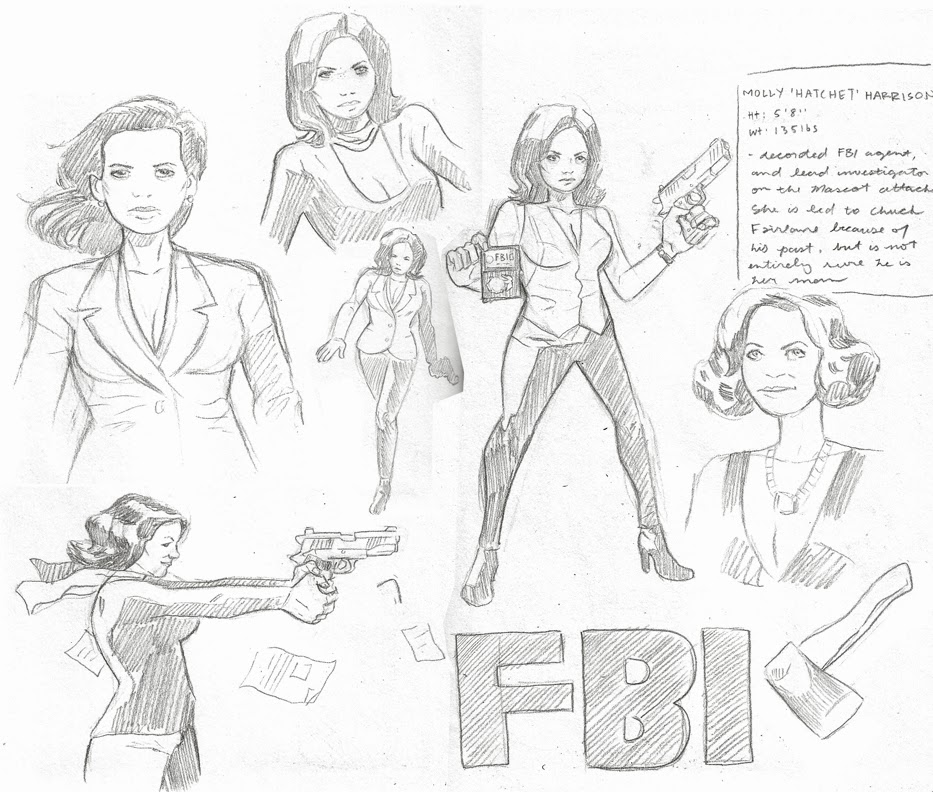 So long ago.  I adored Molly.  I love books with a tough female lead -- it was nice getting to include so much of her!

Then came Crockett.  This one never really evolved.  We all liked the original design: 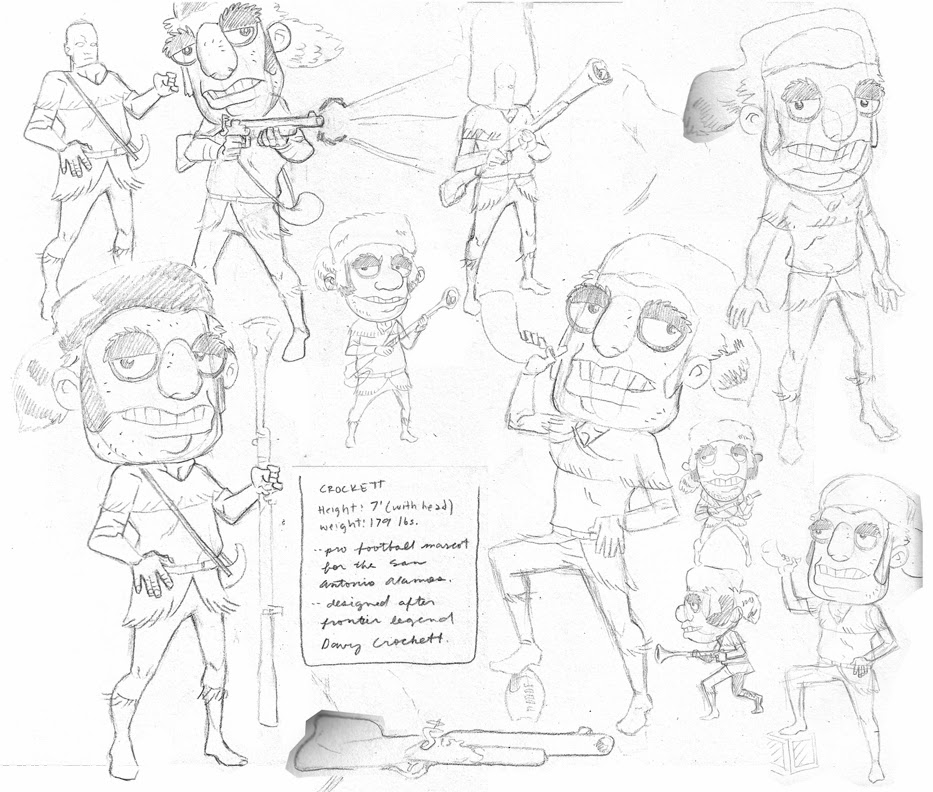 Early on I had no clue how flippin' hard it was going to be to have a regular sized fellah interacting with a bunch of giant-headed assholes.  I soon learned.

Jumbo was our next big mascot reveal.  I initially tried the smaller head to try and draw some parallell to the Rhino in Spidey books (trying to attract some more of the mass reading audience).  Thankfully, Charlie suggested a larger head, which I think was a better move. 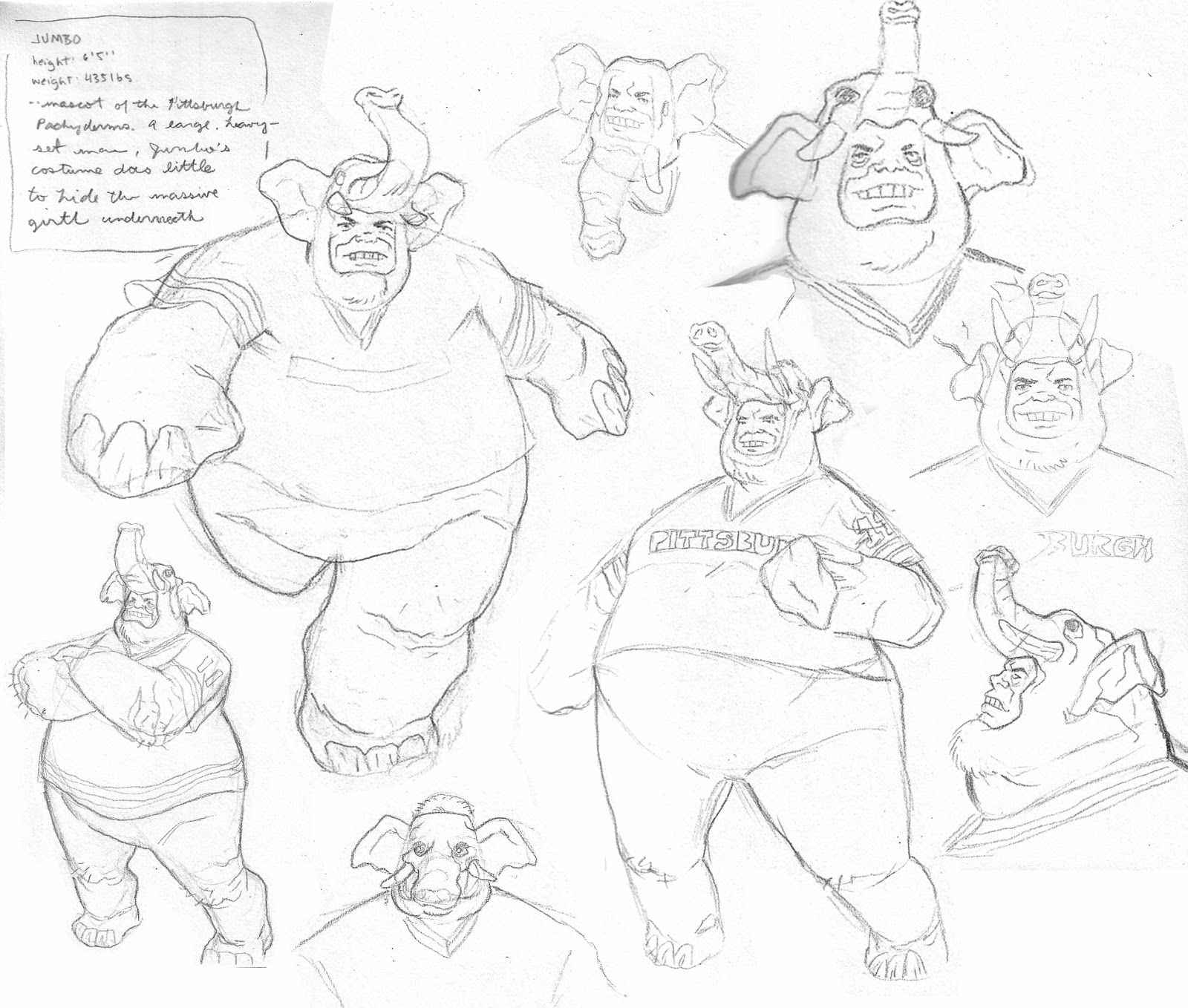 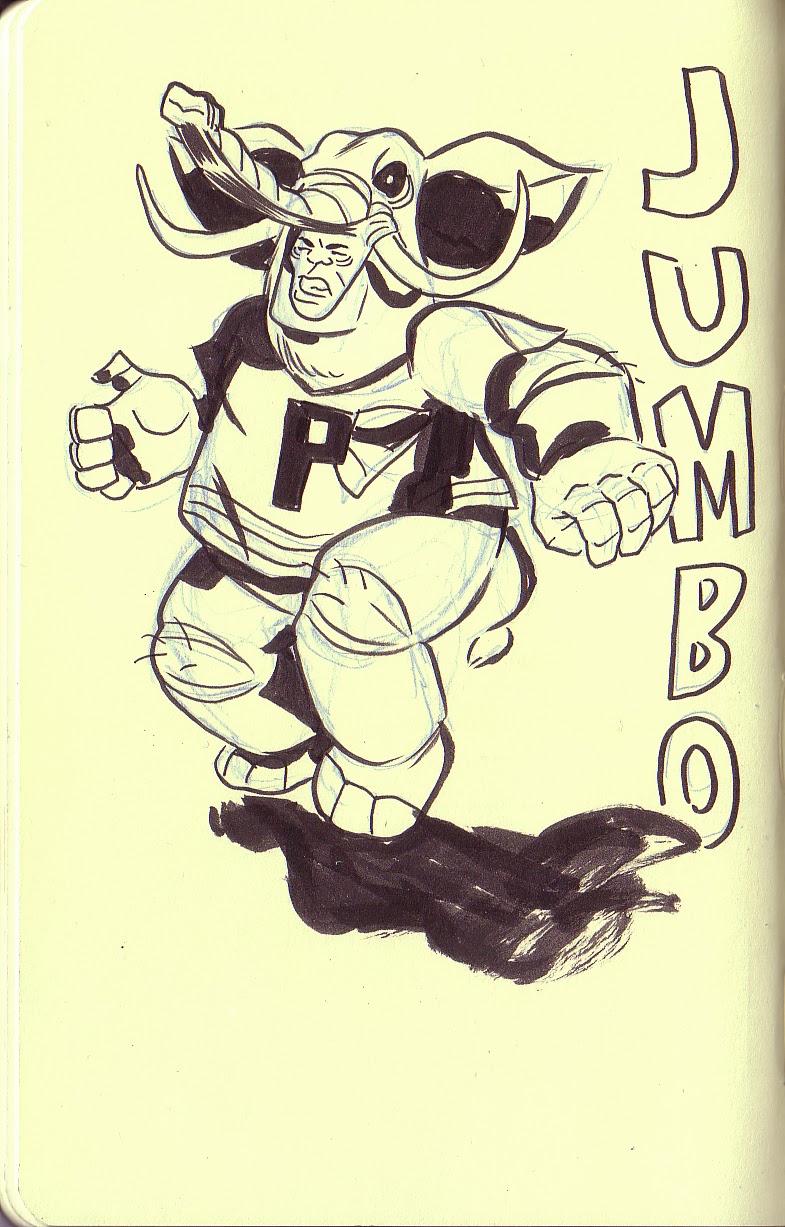 Then along came Barclay the Bear.  Seriously, the whole team is so proud of that chapter.  Such a terrific fight! 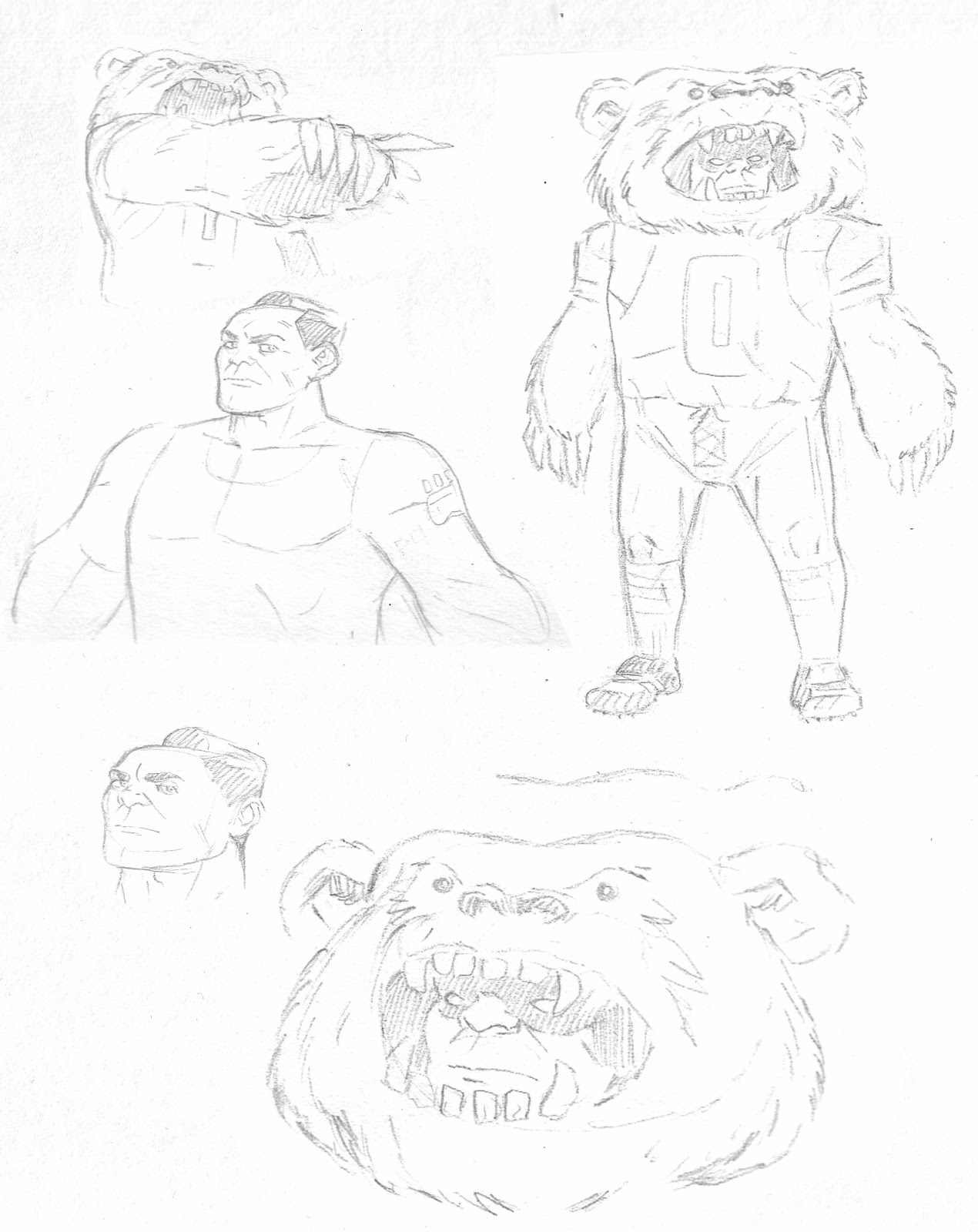 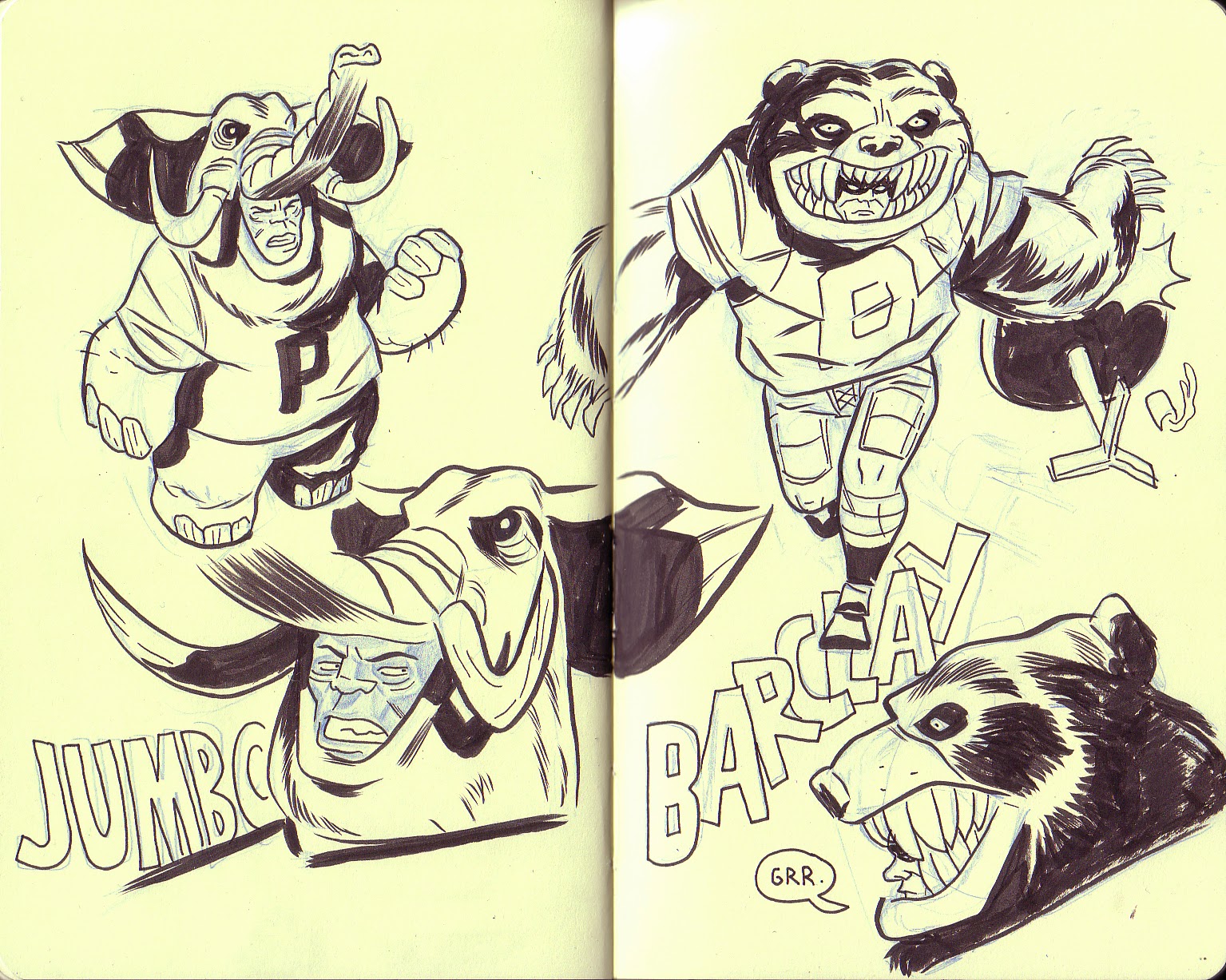 I don't know why Jumbo was a midget in these drawings...?

Now came who would become my fave character in the book, Dogpound & the Sudden Death Squad.  I played around with some seriously crappy designs to begin with: 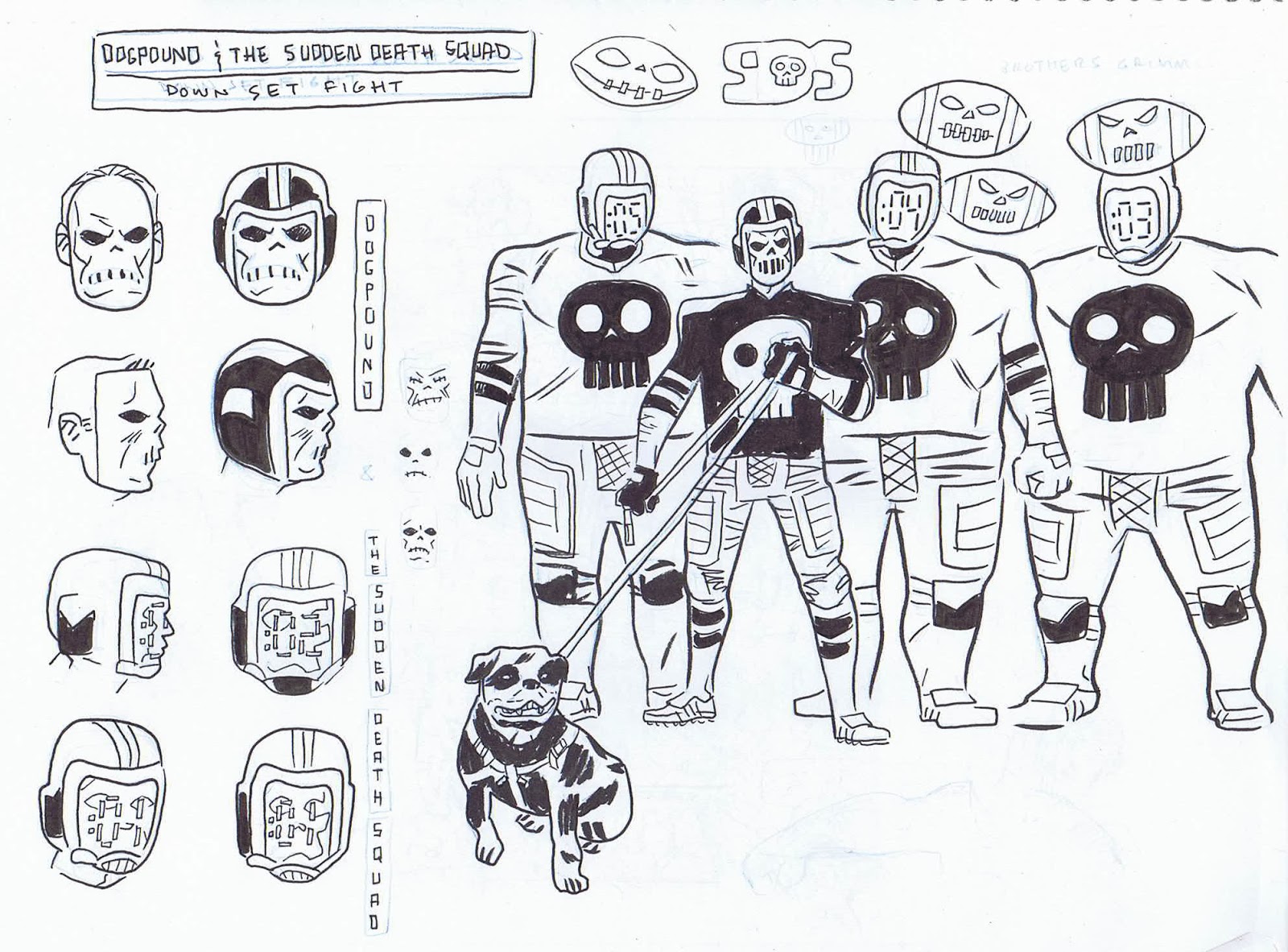 I don't think I even sent these to the team for review.  I was toying around with the numbers on their faces counting down to ":01" -- impossibly lame regardless. 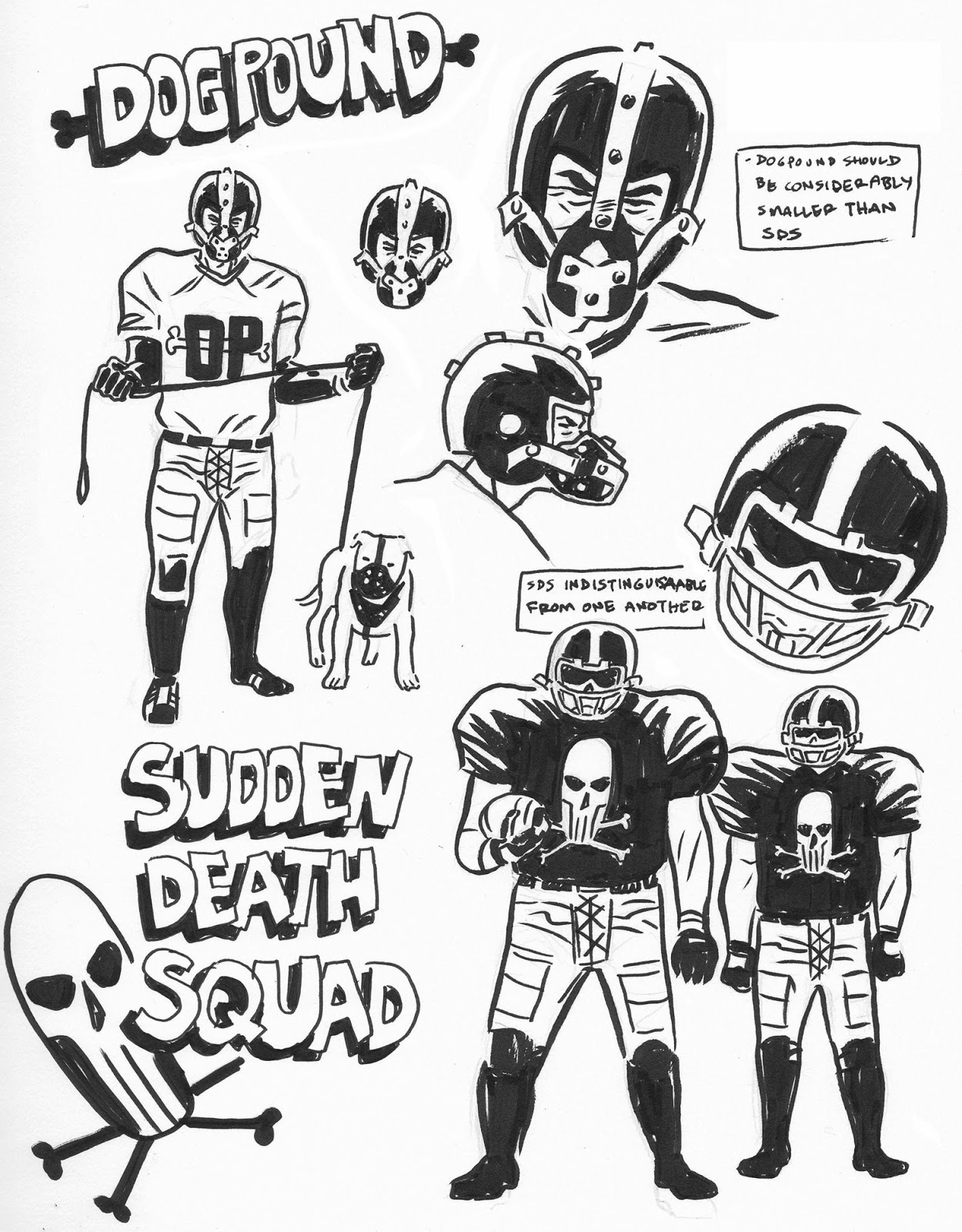 I learned how to draw.  *swish*  I loved the muzzled Dogpound, Charlie pointed out he looked an awful lot like Dark Knight Rises Bane.  He was of course right.  But, a quick revision: 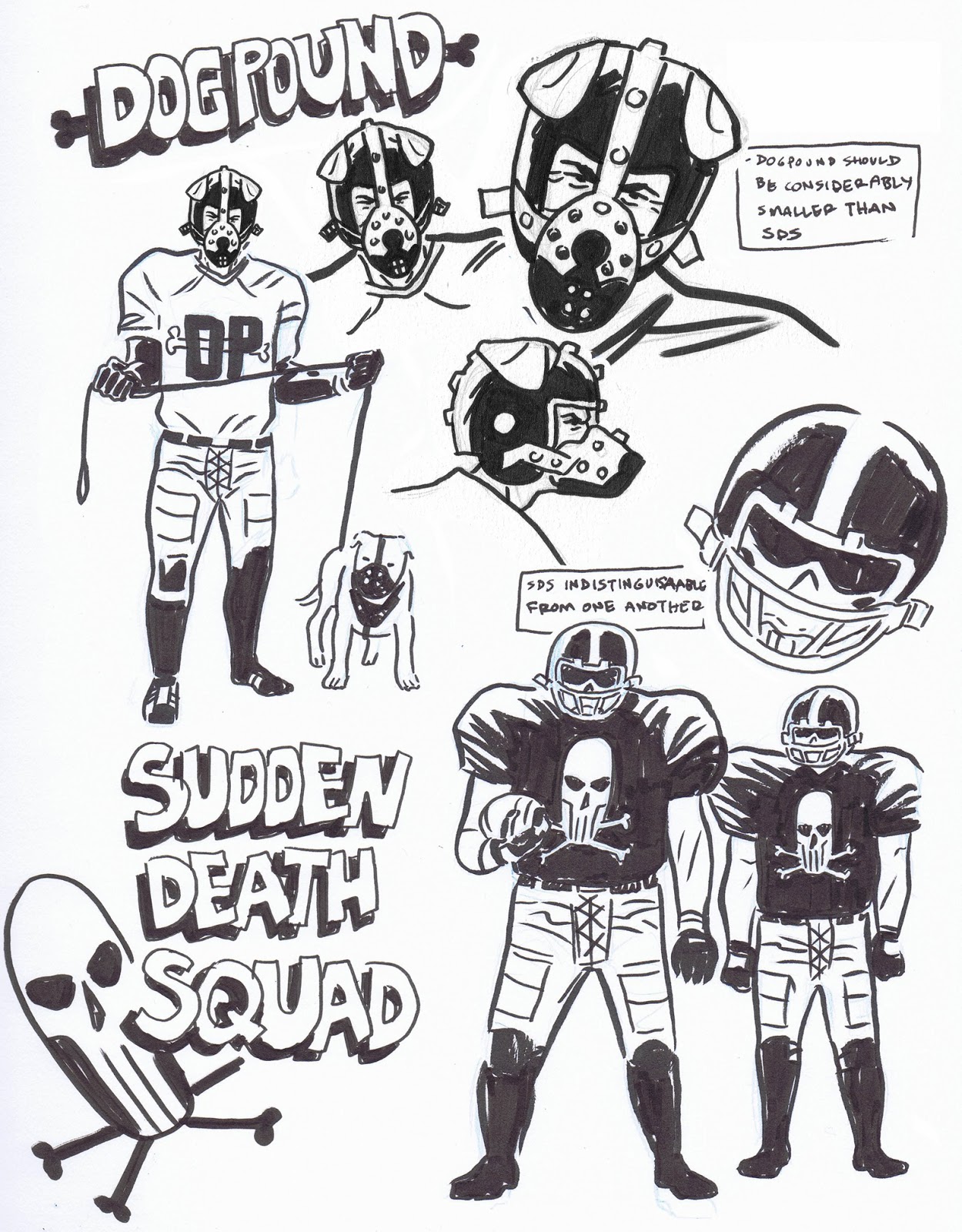 Boom!  Still my favourite character design to date.  Kept the muzzle and made him more dog-like.  Yeah, I'm a little proud of me.  Oh, and did I mention the evolution of his logo:

Please accept my apologies world at large.  Ah, screw it.  You deserve it.

This all led up to the big showdown of the final chapter.  Dozens of mascot, most of which I designed on page, but some required a little planning.

But first, was Big Fight Chuck: 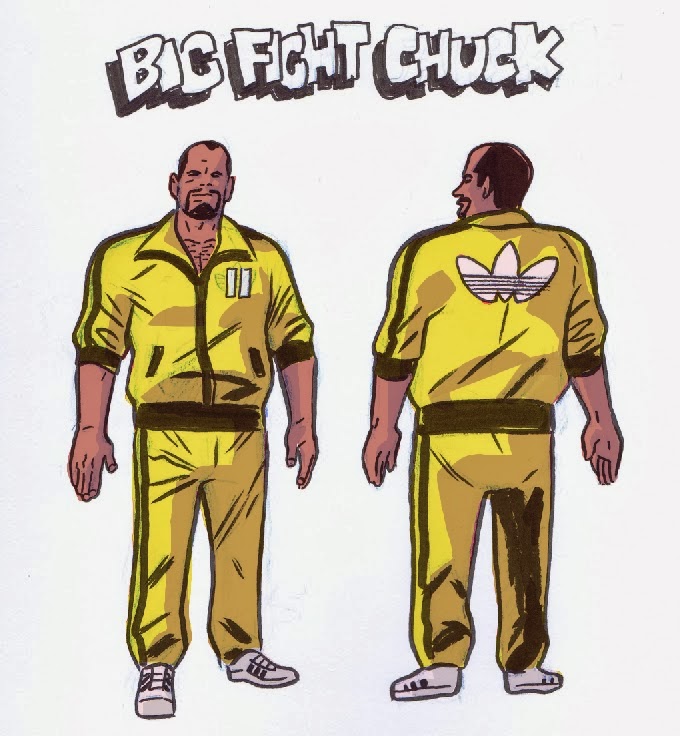 For months I actually tried to contact someone at ADIDAS to try an get some corporate sponsorship for the book.  Sadly, I had to abandon the pursuit after getting no response.  The logo never appears, but, man, do I wish it did.

Al needed a new suit for the fight too.  I dropped the long jacket and the gloves in the end, but still: 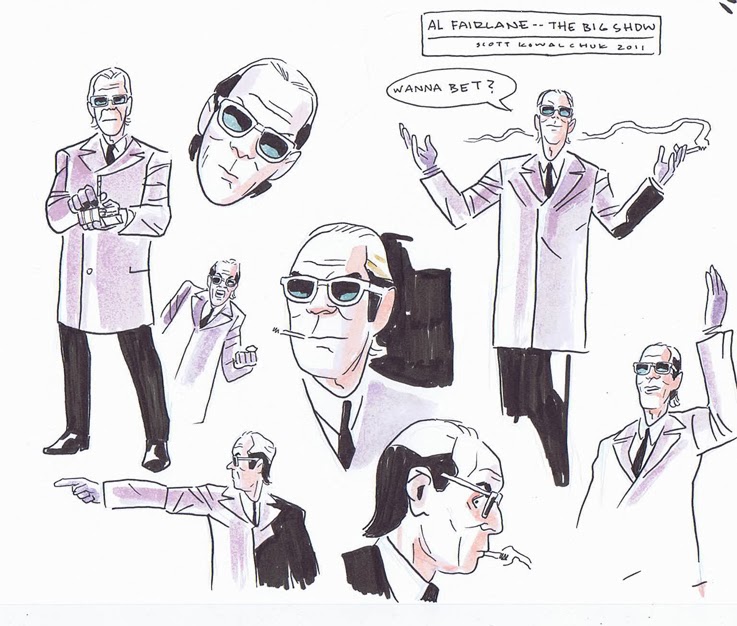 Then came SuperBall.  I adore this jerk: 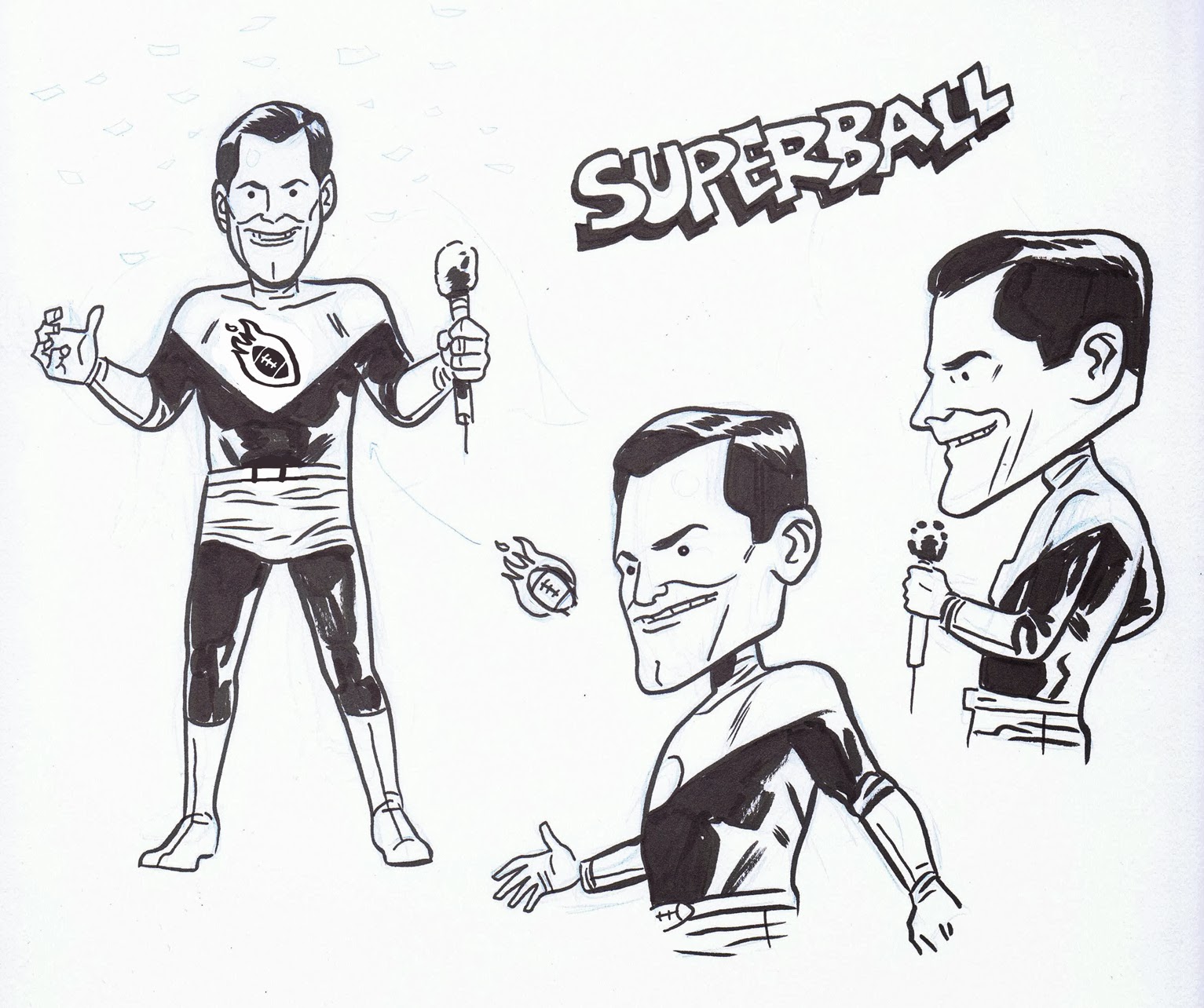 And that's pretty much all worth sharing.  I hope everyone tying into these has read and enjoyed the living hell out of the book.  Beginning to end, this was the most fun I've had drawing comics to date, and I cannot fully express how proud I am of Chris, Chad, Josh & Charlie.  Great team, great fun!  Thanks to everyone involved!  And to you for buying and reading... DOWN SET FIGHT!

Posted by Scott Kowalchuk at 11:29 AM No comments: